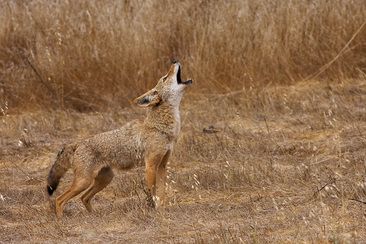 ESSEX COUNTY PREDATORS......
The howls of coyotes have become familiar nighttime sounds across the county, even in the suburbs. When you hear their song, you know that they are there.
The coyote is perhaps the most adaptable and controversial predator. Intelligent and secretive, they are more often heard than seen. Yet, unlike other predators, coyotes survive comfortably in suburban and even urban areas.
But to some, the coyote is an uncontrolled nuisance predator that has become so widespread, it is threatening Southwestern Ontario’s deer herd.
There is no question that coyotes are affecting fawn survival in our area. Last year one local farmer seen on two seperate occasions, 3 coyotes take down 2 different fawns.  Usually this is not an act that would be witnessed.
Normally they eat mostly mice, moles and rabbits, but can feed on anything from grasshoppers and berries to house cats and sometimes the Whitetail deer. Deer hunters, have long considered coyotes a nuisance. We will not succeed in improving the deer numbers unless we succeed in coyote control. Protecting and restoring deer yards is critical, but so is controlling predators around those areas. Coyote numbers need to be managed just as deer numbers are managed.
The coyote is a very smart animal.  When coyotes are removed by aggressive hunting or trapping, the animals that remain have larger litters of pups to replace them. This animal knows how to survive tough times. The coyote helps keep other animal populations healthy and balanced by preying on the sick or weak.
No one is looking to eliminate coyotes, but to simply control and manage wildlife. Do not worry.  The "song dog" is here to stay. They are the ultimate survivors.
________________________________________________________________________________________________