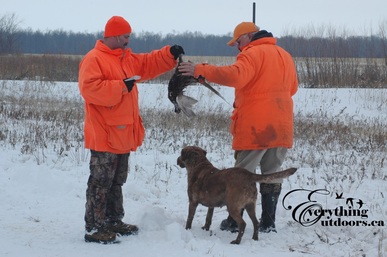 It had been snowing for the last couple of days and the freshened landscape was glistening in the late morning sun.  I had wondered if the upland hunt presented by the Essex Hunting Retriever club was going to take place.  My son and I had decided to go check it out.
Upon arrival to the LEWIS FARM we saw a lot of trucks filled with dog boxes, but where were all the people? We ventured toward the back to the white tent the club had set up that would serve as a refuge from the weather.
There were people young and old gathered watching the upland pheasant hunt.  The snow had not dampened their spirits, hunters are used to the weather being not so pleasant.  Today was a test of all the finished dogs.  Dogs that had been tested over and over again, and were the on the last leg before being marked champions.
Now let me explain, the HRC dogs have to go through 3 different phases of tests, the started dog, the seasoned dog and the FINISHED dog.  Today’s test is about the finished dogs.
This test consists of a simulated pheasant hunt.  There are 2 pheasants placed in the field for the test. After the dog has been released by the handler,  it must display the ability and desire to hunt the available cover in search of game. The handler can encourage the dog to hunt but cannot direct the dog to each bird.  Once the dog has found the bird it must flush the bird and then remain steady to "wing and shot". The dog handler must steady the dog, usually with a whistle, before firing a blank. When the dog handler fires the blank that is the signal to the gunners that they are clear to engage the bird. Once the bird is on the ground one of the judges will release the dog to retrieve the bird and deliver it to hand.
Now lets for a second imagine that we were a retriever.  The anticipation of waiting to get that bird would be intense. We would just want the bird.  It is a very common mistake to drop it at the handler’s feet but this test requests hand delivery.
Now I thought that I would sit back and view a few retrieves and go on my way.  I guess I was wrong.  Upon arriving I was welcomed by the Vice President - Wayne Roy and he insisted that I do the walk.  He arranged that my son and I received orange vests and accompanied them on the course.  We walked behind the field marshal and followed the dog and handler.  The field marshal even put a bird or two in my son’s vest.  He thought that was cool as though we were on a real pheasant hunt.  These dogs were very smart, listening to the handler through every turn and when actually on a bird they waited for the next command.
I took some good pictures and learned a little about the Essex HRC.  These guys and gals are very dedicated to the retrieval of all birds.  HRC is a family oriented organization founded by hunting enthusiasts.  They are dedicated to raising, training and testing hunting retrievers.  Their goal is to promote and encourage hunting with a trained hunting retriever.  This not only improves the hunting breeds but also promotes conservation of waterfowl and upland game birds. Hunting with a trained hunting retriever increases the number of downed birds that make it to the dinner table and make hunting more enjoyable.
By: Danielle Russell
Feb 2010 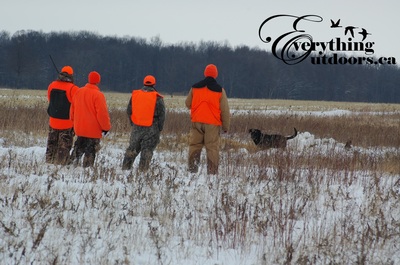 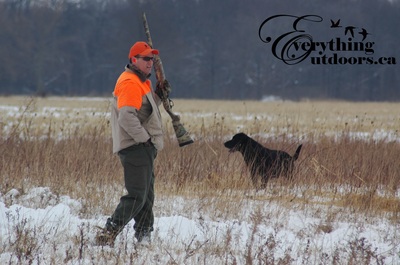 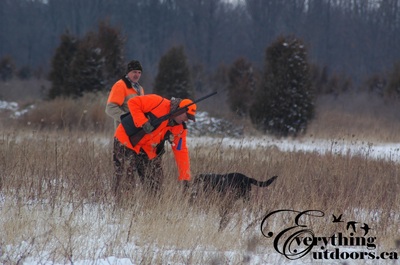 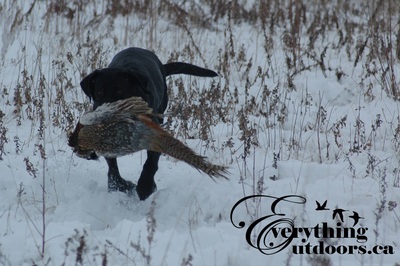 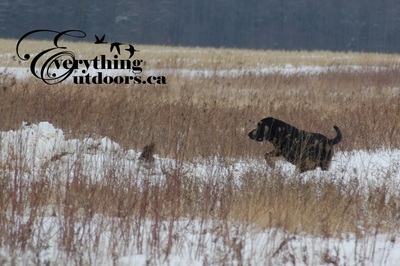 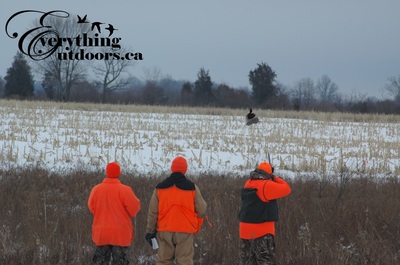 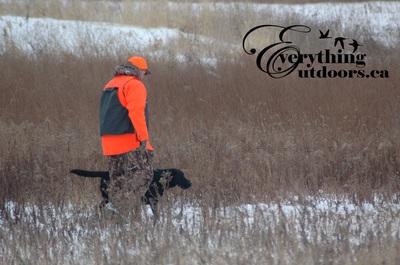 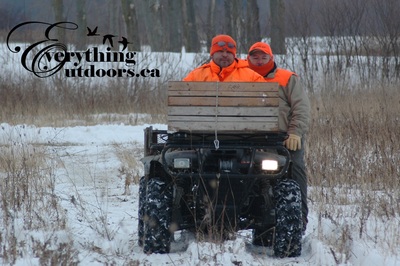 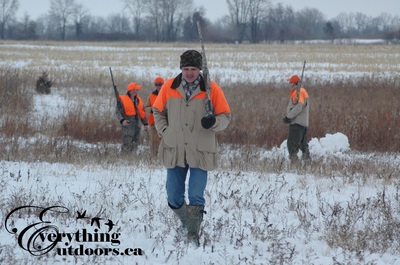 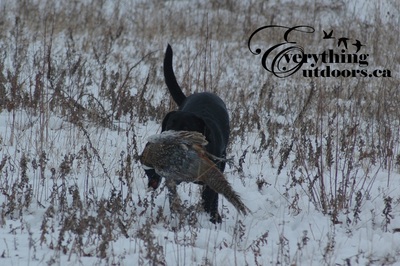 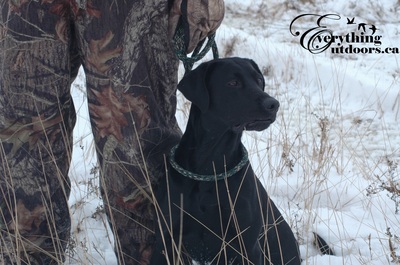 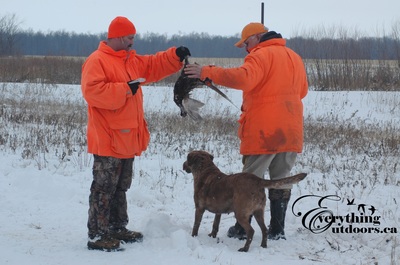 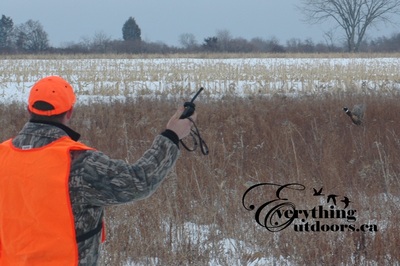 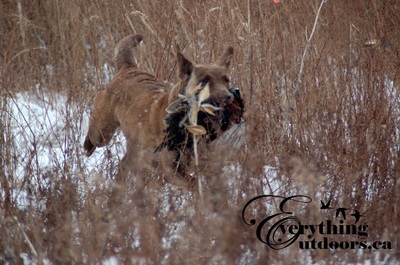 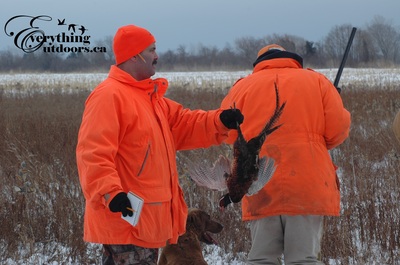 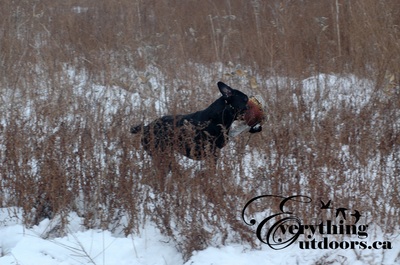 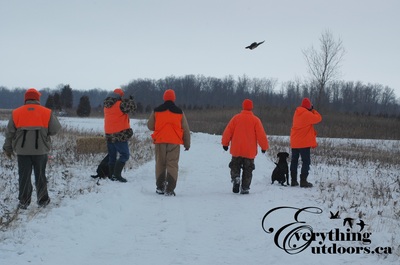 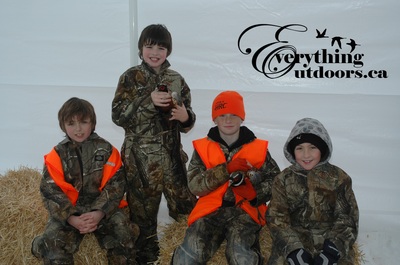 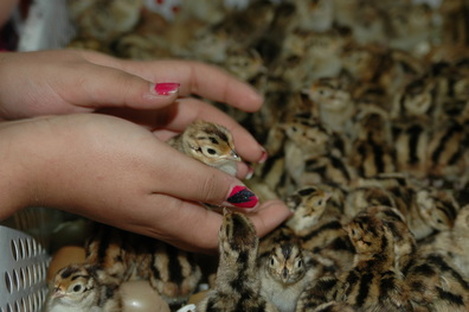 Insects buzz loudly in the heavily treed-lots and the lawns are large and shaded, inviting you to play under the trees and discover what is hiding in the tall grasses at the edges of these properties.  Amongst these grasses you will most likely find an upland hunter's favourite, a flamboyant bird ideal for gun dogs.
Imagine a place so natural and yet so remote.  If you stand on the beach  you can see nothing but Lake Erie extending in both directions until the curvature of the island tapers it off.   With less than 300 people living there and a sky free of urban haze that makes it easy to get lost in the galaxy of visible stars.  The island businesses are based solely on tourism, and their annual pheasant hunt has been on many people’s bucket list.
This annual hunt has been attended by thousands of people from all over the world and can only be made possible by the raise and release program. The release of the Ringneck pheasants help to enhance the bird population and also provide opportunities to our youth in the promotion of proper gun safety and hunting ethics as well as work programs available to our youth of all ages to educate them in their role in preserving their future in our hunting heritage.
The mainland of Southern Ontario also participates in the raise and release program and as many of you already know the pheasant has had it’s hardship in our area and needed some assistance throughout the years.
In 1989, the Gosfield North Sportsmen Assossiation applied for and was granted permission from the Department of Natural Resources to raise and release pheasants. The club purchased breeding stock to provide eggs for the 1990 program. Every year thereafter, the club maintained their own breeding stock for the next year. A hatchery was utilized to hatch the eggs & the day-old chicks were then raised to mature birds. The club maintains brooder boxes for newly hatched chicks and holding pens for younger birds. They also have outside roaming pens for the mature birds. They have since purchased an incubator that has been customized to hatch a maximum of 5,000 eggs in one-half of the incubator in one setting and to provide the newborns a temperature-controlled drying process in the other half.
In 1999, Gosfield North and South Townships were amalgamated with Kingsville and the club expanded its release program. All work has been and continues to be done by members of the club on a volunteer-basis. Men and women of all ages and backgrounds with a common goal of the preservation our hunting heritage.

With many accomplishments and their relationships within our community I knew our visit would be special.  When we visited the facility they had the local 4H Poultry club out.  During the course of our stay the youth were able to assist in counting out approx. 1300 newborn chicks and tour the grounds.  The excitement in the youthful smiles made the day fly by.

The Gosfield North Sportsmen Association are more than willing to answer any questions about the history and future of the RingNeck pheasants and are delighted to do so.   Next time you see a pheasant on your way to work or while taking the dog for a walk, be sure to thank our local group that has made it all possible, the GNSA. 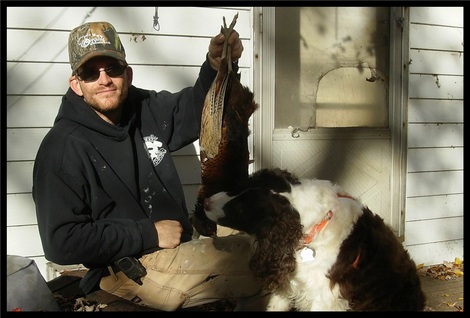