King of the Forest... 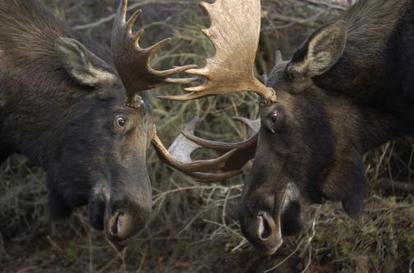 Crouched behind a large spruce tree, I watched in amazement as a massive bull displayed his dominance on a nearby ridge. Powerful grunts followed by vigorous raking captured the undivided attention of two cows standing a short distance away. It was early October, peak of the moose rut. The lovesick moans held his attention but weren't enough to close the deal. So I stepped it up a notch. After emitting a series of low grunts, I grabbed a nearby log and raked the tree branches before me. Evolving into a show of strength, dominance and will, the huge bull postured for the better part of a half-hour. Then, off to my right, a second bull appeared. Intrigued by the commotion and in search of a companion of his own, things were getting interesting. Doing an about-face, the larger bull gathered his two cows and vanished into the shadows of the forest. The newcomer, although attempting to follow, soon gave up in frustration. 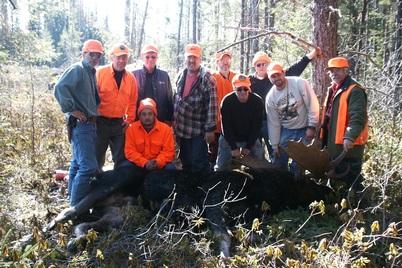 Growing up in the small town of Comber, ON, my father and I patiently await our trip every year to the near north.  We have a hunt camp in CHAPLEAU, ON.  It was 2008 and our group of 20 guy's had 3 bull tags, which we split up over 3 weeks. I was in the first week this year.

We had warm weather and couldn't get the bulls moving much. The last Saturday that we were hunting the first and second week guy's overlap by a day.   So we had about 12 hunters that morning, it was cold and a fresh coating of frost covered the ground.  We split up.  Two of us went out to a fresh clear cut.  This is where it gets interesting.  We spotted two moose in a big bowl down below. The hunter who spotted them first had been a seasoned hunter with lots of harvest to his credit.  I was on my 4 th season moose hunting.  The veteran decided to let me have a chance at a big bull.  I got set on a log pile and got the biggest of the two bulls into my scope. He was a huge 50 inch. spread.  I eyed him up and let him have it, hitting him 2 times.  Then he started moving and I had to wait for a cow to run by in front of him, then I fired my Tikka .300 mag. two more times.  I watched him as he laid down. Just then the veteran hunter told me that there was another bull off the left.  I was in the middle of changing my clips so I told him to shoot the other one.  Good thing I had just bought an extra clip the week before.  As I looked back at him, he had set down his gun to watch me.  So I continued to put in the other clip and proceeded to ready myself on the other animal.  I could not see his antlers for his head was partially blocked by some tree stumps.  The seasoned veteran gave a couple of cow calls to get him to move or turn his head.  He turned his head to look into the bush and that's when I saw the palms of his antlers. I squeezed off two rounds and the 38 inch bull only made it 10 yards. They were both roughly 250 yard shots but all 6 rounds of my Federal Premium Vital Shok 180 grain Nosler ammo found their marks.

Well that's my story it's one that I won't forget for the rest of my life. Thanks guys for all you hard work getting both bulls out of the bush.